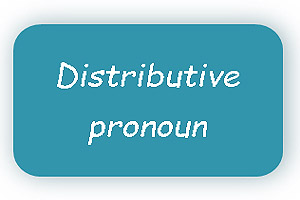 Distributive Pronoun definition and examples, Such words relate to point out one person, one thing, or one place only from a group of persons, places, or things calling Distributive pronoun.

These are only three in number, Each. Either and Neither are calling distributive pronoun and count as singular noun and verb.

Each of, Neither of and Either of is followed by a plural noun and a singular verb.

a) Each: of the houses is surrounding by green grass.

b) Neither: of the children have passed in the class.

c) Either: of these brownies is handmade.

Either and Neither can be used when we are speaking about two persons, in more than two persons we used Any, No one, or None.