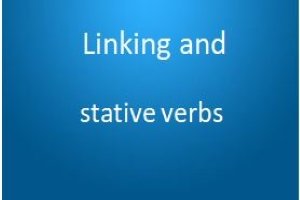 The following verbs are always used as linking verbs

“The book is red.” ‘Is’ is a linking verb that connects the subject (book ), to information about that subject (that it is red).

“The children are running.” Here ‘Are’  links the subject, children, to the word ‘running’ (Running is the information about the children.)

“The neighbours seem unhappy.” ‘Seems’ is linking the subject, neighbours, with the word unhappy which is the main information about the neighbours.

Stative verbs are used to describe a state rather than a specific action. In the present continuous form, they are rarely used.

a stative verb (also known as a state verb) is a verb that expresses a state of being. Stative verbs are different from action verbs because they never describe the moving action, like reading, running, eating, and walking. Rather they allude either to immaterial feelings or inanimate states of being.

Stative verbs are frequently associated with:

Believe – I do believe in magic.

Belong – This book does not belong to me