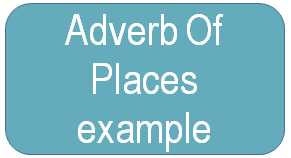 The location of the activity is indicated by an adverb of place.

Adverbs of place inform us where something happens. Adverbs of place are normally used after the primary verb or the clause that they modify. They do not alter or modify adjectives or other adverbs.

adverbs of place are also known as spatial adverbs, but regardless of their name, these adverbs always answer the same question: where?

The list is created by thinking about how these words are telling us about the movement or location. Obviously, these are some examples of adverbs of place but you’re likely to come up with more extra words on your own.

Across, Abroad, Ahead, Backwards, Back, Beyond, Downwards, Down, Everywhere, Eastwards, Here, Indoors, In, Inside, Overseas, Outside, West, There

Rules of Adverbs of Place:

These simple principles always guide you correctly for using adverbs of place:

An adverb of place always refers to the location where the verb (action) is done. To understand it better, consider the following example.

She turned over and went back to school.

Adverbs of place are usually used after the primary verb or object of a sentence.

She would like to move somewhere warm place in the building.

She can walk backward.

Place adverbs can be directional. For instance: north, southeast, around, away, up, down, etc.

The small ball rolled around in my box.

He fell down in the room.

I looked around but couldn’t find him.

Distances can be referenced by an adverb of place. For example miles apart, far away, nearby

He took the opportunity far away.

An adverb of place can be used to describe the position of one thing in respect to another. Few examples are, “Below, between, above, behind, through, around, and so on”

She is getting behind.

The dog is hiding underneath the sofa.

Many adverbs of place finish in the letters “-ward or -wards,” indicating movement in a specific direction. Forward, backward, toward, westward, homeward, eastwards, and onwards are some examples.

He must keep walking homewards until he reached.

She walked towards me.

Sometimes adverbs of the place tell about both location and movement at the same time.