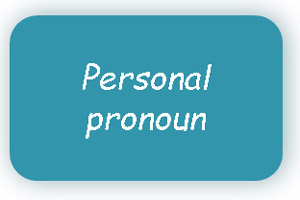 Personal Pronoun utilize instead of Noun, and avoid repetition of noun in the sentence,He, she, I,Me, We Us, Them.

a) She sent flowers to her uncle.

b) who won the cricket match yesterday.

d) What is the reason he change the school.

e) To whom Sara given the books.

It indicates Gender, masculine, Feminine and Neuter gender. He, She, I,

you, it, we and they are called personal pronoun, they used as substitute for proper noun.

personal pronoun has three groups as:

second person- The person spoken to. You (singular& Plural forms both)

“I” always start with Capital.

a)  My Friend Robert, He is very good Rider.

b)  Meet my teacher, she is a very kind nice lady.

c)  My father loves hunting and like to go with their friends.

d)  my friends are very passionate to go on vacations i love to go with them as well.