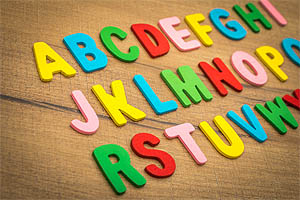 English has a set of rules and every rule must follow if we want to so it is grammatically right. The ‘correct way to speak or write English’ is sometimes referred to as grammar.

A lot of people were confused about what this so-called “grammar” is actually all about. But you should know that it does not focus on letters or anything like that – as such doesn’t really exist (only in Greek Mythology).

Grammar focuses entirely on sentence structure, especially the way words go together, and which words occupy which position in relation to others! If you’re ever unsure of yourself regarding any written form of the English language, then simply look up some current works and see how published books and other online materials arrange their content. There’s always a pattern: This helps you understand how sentences ought to be structured similar to reading a storybook, except now we’re focusing on large print.

Letters or Alphabet combined to form a “Word” for instance, “GIRL” word consist of four alphabets. It additionally consists of “Prefix” and “Suffix”, prefixes in the main like the word “willing”  if we added another word before the main word willing like un-willing now “un” is prefix. Now another word added after “willing” like “willingly” now “ly” is a suffix.

Phrases form by a combination of words and also a clear message not convey in Phrase for instance On the road or In the rain, both phrases consist of words, in both examples, the message is not clear.

Declarative sentences make statements, it is also called a positive sentence, it has a subject and predicate, and usually provided information is based on facts, it can include opinion or observation always end with a period.

a) Sit quietly in the room.

b) Don’t forget your books.

c) Be nice to your mother and father.

e) Go to the market and bring some fruits.

b) What are you doing?

That question which only two answers: yes or no is called  Yes- No question.

Will you marry me?

Can you do it?

That question that has more than two options (except yes or No) is calling the WH/How question.

What is your name?

When do you get up?

A negative sentence that notifies you that something is not so good, contains a negative word like “No” or “Not”. It is used to deny or oppose something.

The baby is not crying

There is no chocolate in the refrigerator.

There are different ways to form negative sentences.

Put “not” after different forms of the verb “be”

T form a negative sentence in the simple present and simple past, we add “do” not or “does not” and “did not” before the verb respectively.

B) Jawed plays the guitar > Jawed does not play the guitar.

C) Hamid caught a Cobra > Hamid did not catch a Cobra.

If the Verb is made up of two or more words, put “not” after the first word.

An exclamatory sentence makes a statement that conveys a strong feeling, surprise, emotions, or excitement. This sentence exclamation mark, some time this sentence contains like, Hurrah!, Alas!, Oh!, Wow!, What!, Bravo!.

a) I had a wonderful day!

b) What a cute puppy!

c) How beautiful she is!

That sentence that expresses the sense of pray, wish, blessing, curse, etc is called Optative sentence. It starts with “May” commonly, it ends with a Note of exclamation !.

a)May you get success!

c)May you get a job soon!

How become a good writer