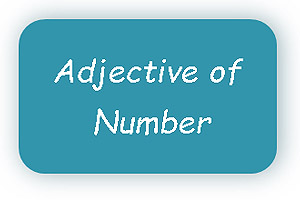 adjectives of number examples sentences This Adjective describe the quantity of Noun or Pronoun, either it is definite or indefinite number is present in the sentence in both ordinal or cardinal number this is also used in question like How much and How Many.

This Adjective has three different kinds,

a) Cardinal. One, Two, Three.etc

2.Adjective of the indefinite numeral.

These adjectives do not describe definite/exact numbers, Some, All, Many, Several, Certain, Any.

3. Adjective of the distributive numeral.

This Adjective describes one number,

Each, Every, Either, Neither.