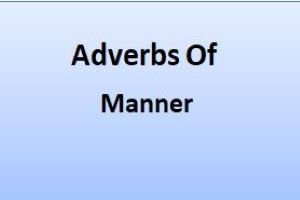 An adverb of manner indicates the manner in which something occurs. It refers to how something is accomplished or done.

An adverb of manner modifies or alters a sentence to describe how something occurs, such as how fast or slowly it occurred. They’re frequently introduced after the main verb or the object. They can provide extra detail to sentences, just like other adverbs, providing the reader with a clearer idea.

The following are some examples of adverbs that are widely used to express.

Position of adverbs of manner in a sentence:

It comes right before the main verb.

She quickly sipped the water.

It comes right after the primary verb.

If the main verb contains an object, the adverb of manner should be placed directly after an object or before the verb but if we want to add the adverb directly before the object then the sentence will be incorrect.

She carefully studied the letter. (before the verb)

She studied the letter carefully. (after the direct object)

She studied carefully the letter. (before object) incorrect

She beautifully plays the game. (before the verb)

She plays the game beautifully. (after the direct object)

She plays beautifully the game. (before object) incorrect

We ate the pizza greedily. (after the direct object)

We greedily ate the pizza. (before the verb)

We ate greedily the pizza. (before object) incorrect

She gave us advice generously. (after the direct object)

She generously gave advice. (before the verb)

She gave us generously advice. (before object) incorrect

If the verb’s object is before a preposition, the adverb of manner can be placed either before or after the preposition.

Adverbs of manner should always appear right after verbs that don’t have an object (intransitive verbs).

Here are some typical adverbs of manner that are nearly always placed straight after the verb Well, badly, hard, and fast are few of them.

Importance Of Adverb Of Manner:

We must know the importance of adverb of manner because even without using an adverb of manner we can complete our sentences but if we add adverb of manner so it will more enhance and glorify the meaning of the sentence and also it provides an answer to the question of how the action is carried out for example.

Here if we add adverb of manner then it can explain more about his quality playing.