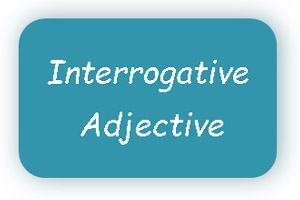 In Interrogative pronoun used to ask questions, it does not modify nouns or pronouns it also stands alone.

a) What are you doing?

b) Which is the best opportunity?

e) Whom do you know?

f) which is your pen?

g) Who is your friend?

i) Whom are you talking to?

Above sentences notice that after WH noun does not appear.

In Interrogative Adjectives appear before Noun.

a) Whose bags are these?

c) What are the reason are you going to give for being absent?

d) Which pen is yours?

e) Who the girl is this?