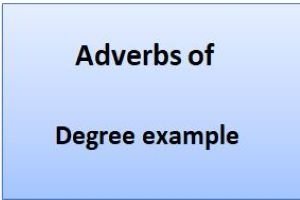 An adverb of degree is a modifier (it modifies a sentence) by telling us what is the intensity of something in a sentence.

There are some exceptions to the rule of placing them but mostly they are placed before the adjective, adverb, or verb that they modify.

Here are a few examples of adverbs of degree “too”, “enough”, “very”, and “extremely”.

Adverbs of degree allow you to be highly detailed while writing. The adverbs of degree have been highlighted in the following examples to make them easier to understand.

The weather was extremely hot.

The lecture is quite boring.

Here hot and boring both are adjectives, and extremely and quiet are the degree of adverbs which are explaining the intensity of the adjectives in both sentences.

She was just cooking.

He has almost started.

Here cooking and starting both are verbs, just and almost are which are explaining the intensity of the verbs in both sentences.

She is running very fast.

You are running fast enough.

You are walking too slowly.

Here very, too and enough all are the degree of adverbs. In sentence number 3 “TOO” is explaining the intensity of the adverb of manner (slowly).

Adverb of Degree also known as Adverb of Comparison:

The degrees of comparison in grammar are related to adjectives and adverbs.

There are three degrees of expression for every adjective and adverb:

The Comparative Degree: This compares two items to determine which has a lower or higher degree of quality. As an example,

The Superlative Degree: It compares two or more objects to decide which has the lowest or best quality. As an example,

Here are the three degrees of comparison for the adjective “thirsty”:

Here are the three degrees of comparison for the adverb “dangerously”: